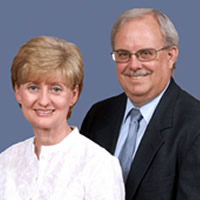 Initiating a Chaplaincy ministry program within the continent of Africa has proven to be a blessed challenge. Blessed because it has been met with overwhelming acceptance in every place where it has been presented. Challenging because of the sheer volume of people wanting to be trained, and because of the vast distances involved.

Basically, the Chaplaincy ministry is a series of very specialized training sessions which equip both lay people and ministers to go into special professional areas that are not typically open to the church, or to normal church ministries.

We train specialized Chaplains to work in various areas of the Armed Forces, with Police, in hospitals, prisons, schools, businesses, etc. Basically, any institution where people work or live. Chaplains typically work with non-churched people in purely secular and professional institutions. The majority of the work of a Chaplain is done with people who are hurting – people who are experiencing, or who have recently experienced, a severe trauma in their life. Many times this includes the death / loss of a loved one. However, we also work with those who have suffered because of war/civil conflict, natural disasters, and any other reasons that throw people into unexpected trauma and crisis. Our Chaplains are trained to minister to people who are in grief because of severe loss. They are also trained to work directly on the field with soldiers, police, fire-fighters, and other first responders. They are trained to work alongside physicians in emergency rooms, neo-natal units, trauma units and other places where people struggle for life, as well as ministering to their families. The ministry of Chaplaincy is carried out away from the local churches, going directly to the place where hurting people are found. Chaplains learn to become the arms and face of Jesus to people who may never have the opportunity to see and learn of Him in a normal church setting. Our Chaplains work alongside professionals such as soldiers and police, gaining access because of their specialized training and certification to places a typical pastor or minister of the gospel would never be allowed to go.

So far, we have trained Chaplains in Zambia, Kenya, Tanzania, Uganda, Nigeria, Togo, Chad and Ghana in Africa, along with many, many other countries around the world. I am a founding Board member of the Global Chaplain Coalition, which trains and certifies Chaplains all over the globe. Chaplains who complete our training have an opportunity to become members of this Coalition.

In Africa, our greatest work to date has been in Chad, where earlier this year we graduated 52 Chaplains in a formal service which was attended by city officials as well as leaders from various denominations. I have also trained Para-Military Chaplains in Legos, Nigeria, with an ongoing invitation to return to their headquarters further north in the country to train their main body of Chaplains. We are also working with the military of other countries to provide training to existing Chaplains who have never had the opportunity for this level of professional training.

Paul Stockard has been a missionary for over 26 years, and a Chaplain for over 30 years. He and his wife spent 16 years living as missionaries in the South American country of Paraguay.

During this time, he served as a church planter, Seminary professor, missions director, Chaplaincy director (also director of South America), and was elected by the ministers of Paraguay to serve as their National Overseer. While in Paraguay, he also travelled all over South and Central America training Chaplains. His wife, Rhonda, started and ran a primary school for the poorest of the poor children that lived in the city garbage dump.

For the past 11 years, he has been working on the African continent, serving for most of that time as the Coordinator of Specialized Outreach – which includes primarily chaplaincy and missions. He served as a member of the Africa Council since 2008. In 2017 he was asked to take over administration of the Church of God orphanage in Nairobi, Kenya. The Kibera Kids Center Orphanage is a large project (14 acres) located adjacent to the Kibera Slum, one of the largest on the continent. This project serves as a rescue home for children, and includes a chapel, pre-school, primary school, and secondary school along with the main orphanage building which is rated to accommodate 450 children.

In 2018 he was also asked to take over management of the Regional Bible College in Lusaka, Zambia. Currently they are working on becoming certified and accredited to offer a BA degree in three areas: Chaplaincy, Theology and Ministerial Leadership.

He still travels the continent in the ministry of training chaplains who do ministry in the military, prisons, hospitals, with police, schools, and anywhere else you can find hurting people. 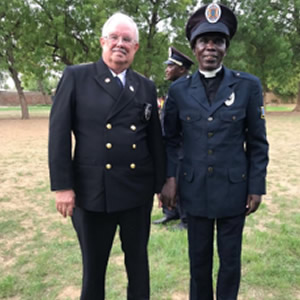 Paul with the National Overseer of Chad, at the Chaplains Graduation 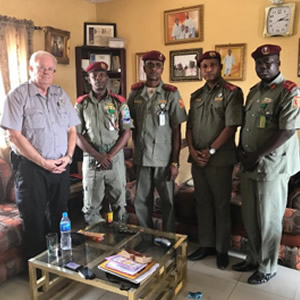 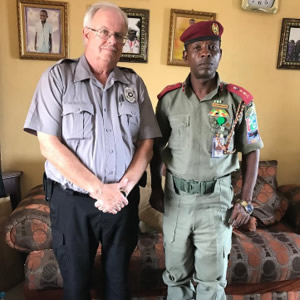 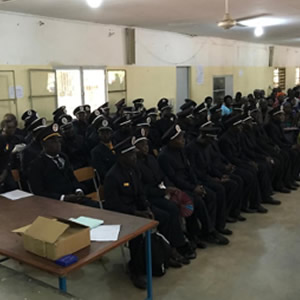 Paul with Generals from the Nigerian Chaplaincy Corps 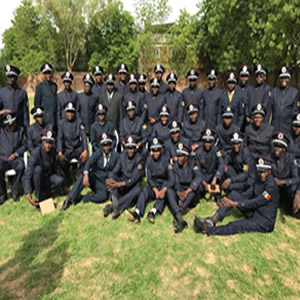 The Chaplain General of the Nigerian Chaplaincy Corps 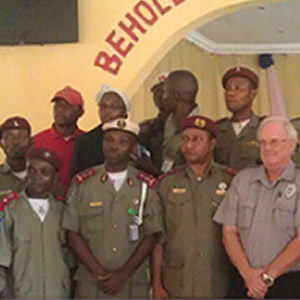 First graduates of the Nigerian Chaplaincy Corps in Legos, Nigeria 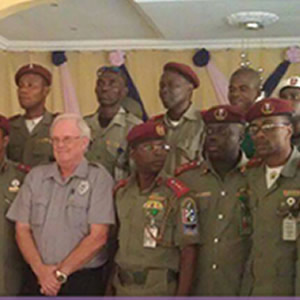